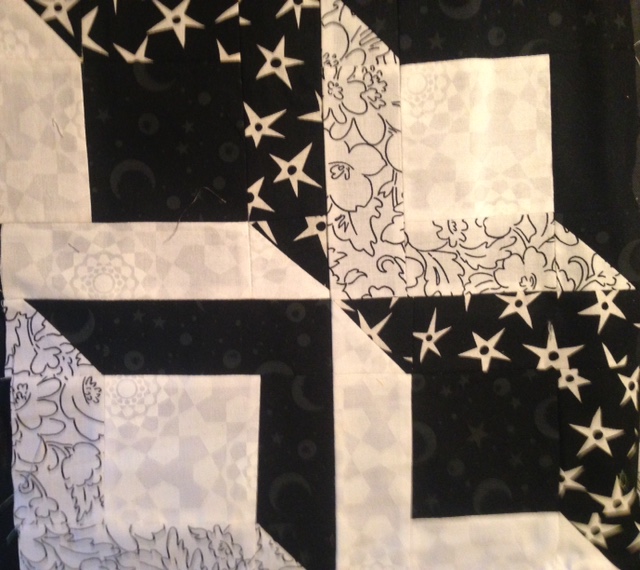 The black and white quilt – a time honored classic.  The extreme contrast between two colors, one that absorbs all light rays and one that reflects all light rays.  This contrast enhances and defines the chosen patterns in each quilt block and works together to produce one complete and beautiful whole.

But what of the black and white society?  Obvious contrasts in skin color, one with a generous helping of melanin and the other with an obvious lack of melanin.  It is sometimes puzzling to a biologically-minded individual how such a small difference in genetics has contributed to centuries of social strife.  There are no easy answers; centuries of societal and cultural practices, opinions, fears, misconceptions, and myths have caused great harm and a seemingly endless struggle for humanity.

In my mind it all boils down to where I fit within the discussion, and, as with most people I often struggle to relate to a larger picture outside of my own experience.  I am white, Caucasian, from western European/English heritage as far back as my genealogical record extends.  I grew up in a traditional family where my parents associated mainly with people just like us and had opinions about everyone who wasn’t just like us.  As an adult I have challenged my own early imprints to try and discover what my reality of world-belief actually is.  With half a lifetime past now, I’ve raised children, step children and “other children”, including 6 foster children from Ghana who are now grown and an integral, cherished part of our family.

You see, I quit my job this week.  As one of 2 white employees in a city department, in a city that is very predominantly black, in the South.  Years ago I attended and graduated from the local black university to continue my education.  I tried to believe then that I fit in, thinking that learning should have no prejudice.  I had good instructors that spanned many races and cultural heritages.  In many respects I developed some warm friendships with fellow students but, in contrast, I also found hate notes left on my vehicle.  At graduation, the speaker was a follower of Louis Farakan , who whipped the crowd into a frenzy with blatant anti-white rhetoric and hate filled speeches.  Had I not been receiving the gold medal for the highest grade point average in my academic department I would have walked out in protest.  I subsequently wrote a letter to the Chancellor, expressing my anger that an institution of higher learning would condone such blatant racism in a Guest Speaker for graduation.  His response to me claimed that the school had no control over what graduation speakers said and that white students didn’t typically support the University after leaving anyway.  Basically, meaning to me, that white students didn’t matter.

And back to my job.  Perhaps I was naïve to think that I wouldn’t be a target.  My work ethic was to do everything I could to improve the City within my sphere of influence and treat everyone fairly.  I’m sure I made mistakes, with no training or assistance from the City provided, but I never intentionally wronged the City or any person.  Despite this and the hundreds of thousands of dollars I brought in, it became clear to me that there was a faction among the some black workers in the City to force me out.  Some of the few other white city employees warned me repeatedly that I was being targeted because I was white.  I even communicated this to the newly elected black mayor in some open and honest discussions we had, but to no avail.  The professional harassment became more than I was willing to live with daily; life is too short.  And so I quit. 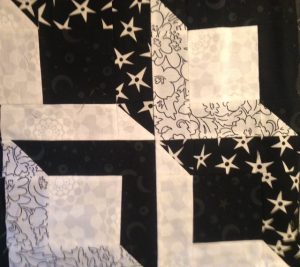 So now the larger question I face within my current angry and frustrated emotional state is,  Do I fall prey to the “us vs. them mentality”, in which there are ample white people who support my “side”.  Or, do I fight the tendency to retreat into my white corner and take the “we are one” approach?  Realizing that I can be validated in my aforesaid corner, I also know that I will be giving in to the baser elements of my psyche, retreating to my childhood safe-zone instead of embracing the values I believe are intrinsic to my adult beliefs.  Again, I focus on the belief that each individual must be valued for the person they choose to be, despite the race/group/religion/political dogma to which they appear to belong.  And I must remember that, as within the patterns of a black and white quilt, the contrasts and differences of the black and white fabrics work together to produce a creation that is far more interesting and beautiful that they could ever be on their own.